I’ll admit when I first started eating sushi, I wasn’t very adventurous at all. I’d stick to the basic avocado and cucumber rolls, maybe get wild sometimes with the omelet nigiri, but it wasn’t until many drunken nights out later that I daringly started picking sushi off the conveyor belt.

Behold, 2 of the best tentacle sushi that I have ever eaten (squid and octopus): 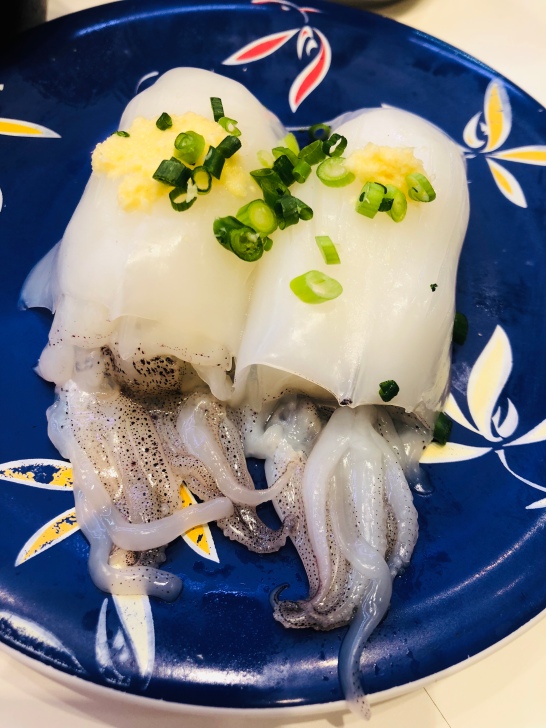 Additionally, there was another sushi called “Black kite kid”, which I find very interesting because Black Kites are actually birds.

It was actually surprisingly delicious. The topping actually tasted like slightly minced fish eggs (which took me a while to acquire a taste for), and was slightly seasoned. Whether it was actually fish or bird–it tasted amazing! 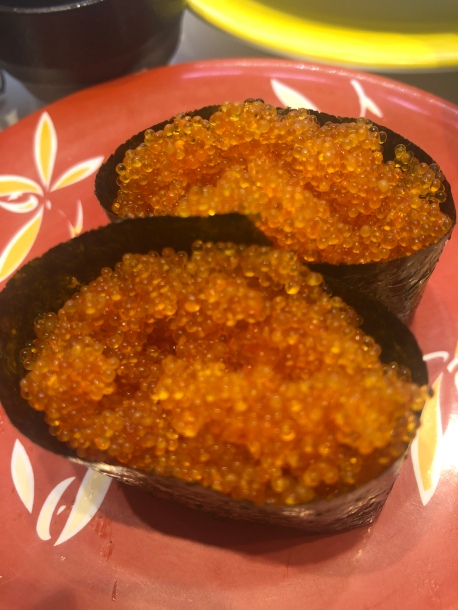 Since I was already a 500ml bottle of sake in, I decided to dive even deeper into the strange sushi realm and pick up this green sushi that looks abhorrent at first glance but actually tasted amazing:

If I was sober, I would have never picked this up off the conveyer belt (and it had been rotating around for quite some time already), but I was in the mood for something different than your typical nigiri or maki so I boldly grabbed this one. If memory serves correct, it was avocado spread and some kind of minced octopus. I really hit the jackpot that hit my tastebuds! I promptly ordered 2 more plates afterwards and my friends thought that I was crazy, but I am not at all ashamed of my tastes.

Quite buzzed and full, but wanting to end my meal on a good note with the Neon flying squid. 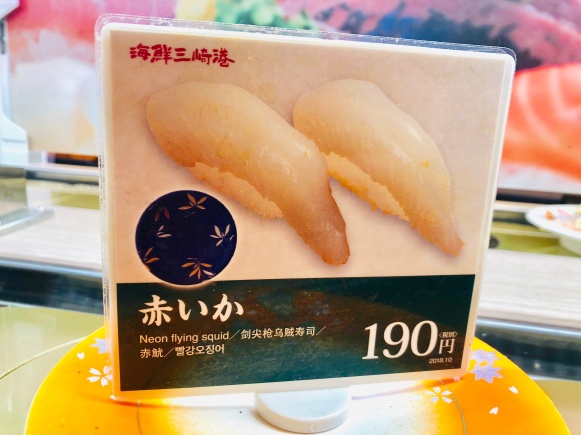 No, I did not see colors, but yes, the Neon Genesis Evangelion theme started playing in my head. At that time, I knew it was time to start heading back. All of these sushi dishes were extremely affordable and high quality compared to other kaiten sushi chains.

If you’re craving something that’s both familiar but also has some variety, then I highly recommend going to Kaisen Misakiko in Shinjuku because you won’t be disappointed!

Also worth mentioning, on Halloween in Shibuya, I was served chirashi sushi in a pumpkin at one of the popular Genki Sushi chains:

Life can be pretty surprising sometimes. I recommend that you try as many new things as you can because you might actually surprise yourself and find some food you really like! I evolved from a strict vegetarian diet in the states to a more healthy pescatarian diet here in Japan.

As for tips on how to work up the nerve to try new things? Drink a lot of sake with a group of Japanese friends and all order dishes together! Being intoxicated has made me more fearless when it comes to trying food, but I still have yet to try natto. Someday! Many aesthetic food journeys await!